About CAMERAS at the CHUPINAXCO ceremonies on July 6th

Some FUN FACTS about the CHUPINAXCO - Part 1

How to Run with the Bulls - Part 3

If you have read parts 1 & 2 and are still interested then you may well be a candidate for a run with the bulls in Pamplona!  But before you decide to run, it is highly recommended that you watch at least one run first before you participate. Consider renting a balcony for the day before you plan to run.
Here is the next myth to dispel - you cannot run the entire course with the bulls.  Bulls run at over 35 mph and you cannot hope to keep up with the bulls for the entire course of the run.  So, you must pick your desired leg to run.  About 15 minutes before the bulls are released, the police break their lines and allow the runners to spread out along the course.  By now, you should have picked your desired spot and proceed to where you plan to run.
At this point, the loudspeakers of the town begin to broadcast messages to the runners.  You can feel the hair begin to raise on everyone's neck as the realization hits that yes, you are in the street, yes, bulls will be heading your way shortly and you are in a very narrow street and yes, this is really going to happen.  As the runners begin to disperse from town square there is more breathing room now on the streets and you can look around and see the different running styles that are about to take place.
There are those who head straight for the walls and have no plans to run.  They plan to just watch the bulls go by and say they were there.  Some stand in the middle of the road and begin to jump and stretch to get ready.  These are the lane runners who, once they hear the rocket, will pick a lane and run until the bulls catch them, then they will move to the side and allow the bulls to pass.  And, there are those who look totally bewildered and obviously have no clue what they are doing and have not done any research or preparation for this event.
Then it happens.  A rocket bursts loudly overhead signaling that the bulls are now out of the corral and heading your way.  Ah, the moment you have been waiting for is finally here - and total panic takes over the crowd.  People begin to run wildly or scramble for the fences with all color drained from their faces.  Now is the time to implement your running strategy - don't panic, just stick to your plan.
Posted by Maria at 9:10 AM 2 comments:

What are the DATES of the San Fermín fiestas?? 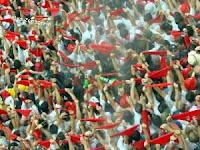 How to Run with the Bulls - Part 2

So, you have decided to run with the bulls and now know that you do not need to sign up, per the last post. So far so good. Here is what you can expect next.

Since you read the last post, you know that all runners gather in the town square, the ayuntamiento, at least an hour before the run. Thus, you are now packed into a small area between the wood barricades with about 3,000 other runners. There is so little room that everyone is standing up as there is no where to sit down. In addition to the Spanish and Basque languages, you will hear conversations of all type going on around you in about every language. At this point, everyone is calm but there is a nervous edge to the chilly air. You can feel the building anticipation underneath the calm at this point.

Don't be surprised to see policeman, at this point, wandering through and scoping out the crowd. They are looking for unsuitable runners. As I mentioned in the last post, while this is insanity and all hell is about to break lose in an hour, it is organized insanity and there are rules.

If you appear drunk, the police will eject you immediately. They are also looking for people carrying cameras or wearing 'helmet' cams on their hats. If they find that you have either, you will be ejected without question. If you have open-toed shoes or other inapproriate dress, you will be ejected immediately. If you are ejected, it is suggested that you not put up a fight or make any dispute with the police - they are very serious about their job and will not listen to any appeal. If you are selected for rejection, you are rejected - it is just that simple.

Remember, these are their prized bulls that the city pays handsomely for, their priority is the safety of the animals from the corral to the plaza. Next, we will talk about the last few minutes before the event begins.
Posted by Maria at 9:11 AM No comments:

Labels: running of the nudes

Run with the Bulls - Do I have to sign up?

The first question I get asked about running with the bulls is, do you have to sign up ahead of time to run? The simple answer is no, you do not sign up for the run but there are rules to follow. Here are the basics:

Each morning, the police allow anyone interested in running to enter into the Plaza Consistorial, or town square in front of the Town Hall (Ayuntamiento). This is the only place that runners can gather before the run. All the rest of the unknowledgeable tourists spread themselves up and down the route of the bull run and are sadly disappointed when the police force them from the streets before the run begins.

The other runners are forced from the street so that the city can clean the streets before the bull run begins. This is done more for the safety and security of the bulls than it is for the runners. The city pays big dollars for these fighting bulls, and they do not want any bull to get injured during the run. If a bull were injured during the run, then that bull would not be eligible for a fight that night.

Next, we will explore what happens once all the runners gather in the Town Hall Square.
Posted by Maria at 7:50 AM No comments:

Welcome to Run with the Bulls Blog

While there seems to be a lot of information out there about Pamplona and the bull run every July, there is more information lacking than there is available. The purpose of this blog is to try to impart the detail about the festival of SanFermin and the running with the bulls that is not readily available. Will start to write more as time permits.

Ya Falta Menos!
Posted by Maria at 8:28 AM No comments: