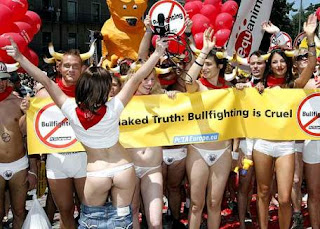 Many of you have written to us, asking about the nude protests that have been taking place in Pamplona each July 5th, for the past 18+ years!  This non-violent event in Pamplona has grown into a protest of about 2000 naked, or at least semi-naked, PETA members - all of whom are true animal lovers and much concerned about the treatment of the bulls, during the San Fermín fiestas.  Most of these kindhearted adults wear not much more than their red scarves and tiny bullhorns on their heads, and, consequently, they are quite successful in gaining lots of attention and international news coverage for their cause! The exact time and route of the protests are usually unknown to spectators - and even to the participants, as well!  But, you can be sure that the protests will take place on July 5th - sometime in the late morning through the afternoon hours, in the old city, Pamplona!

Rumors ran rampant this past July, 2018, that the nude protesters were not going to come to Pamplona on July 5th, so as not to draw more curious tourists and money to the San Fermín fiestas. However, rest assured, there were indeed hundreds of semi-nude PETA participants, scattered throughout the Plaza Consistorial, aka the Town Hall Square - and, yes, lots of photographers did show up to record the events in high definition!
For more information, and to pre-register as a nude participant, check out: http://www.runningofthenudes.com/

HOW CAN WE PREPARE OURSELVES for RUNNING with the BULLS in PAMPLONA? 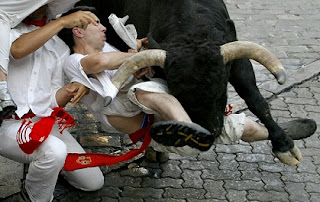 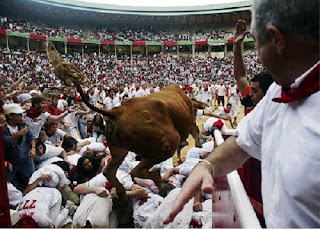 Many of you have asked us for suggestions as to how to run with the wild bulls in Pamplona...

If you do plan to run with a pack of six, wild, angry, and frightened bulls, we suggest that you do yourself, and those who love you, a real favor:
Read and study the very important information about "Running with the Bulls" at this great website: http://www.partyearth.com/cities/pamplona.
Viva San Fermin, 2019!